Mine Accident Shows a Potash Market Nervous About Supply Shocks

By  Jen Skerritt  and  Aliaksandr Kudrytski

The news, when it came late Friday night from a government ministry in Minsk, was grim: the ceiling of a potash mine in Belarus had collapsed more than half a kilometer underground, trapping two workers.

Halfway around the world, the reaction to the headlines was swift and dramatic. Shares of some of the largest potash producers soared in New York and Toronto on speculation that the accident could knock out a large chunk of global production capacity.

The March 9 episode vividly illustrates that after a decade of gluts, the industry is suddenly nervous again about supply shocks. Demand has been constantly increasing and any change in production from the world’s top suppliers in Canada, Belarus and Russia has the potential to impact the market dramatically, said Daniel Sherman, a senior analyst for Edward Jones in St. Louis.

“If a large mine in one of those suppliers is hit, it’s clearly going to put a dent in the supply,” Sherman said by telephone. “One of the key things is the supply is very concentrated.”

Belaruskali is the world’s second-largest producer 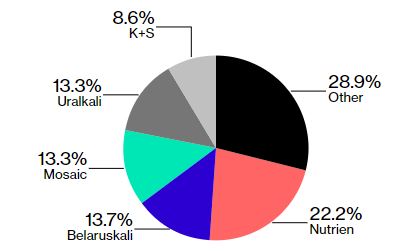 State-owned Belaruskali is the world’s second-largest potash producer and is one of three companies, alongside with Russia’s Uralkali and North America’s Canpotex, that accounts for more than 60 percent of total output. The fertilizer ingredient is used to strengthen plant roots and boost drought resistance.

While Belaruskali insists there is no threat to production, the accident has shown how vulnerable the market is to disruptions at a time when demand is poised to rise: India and China are negotiating supply contracts, buyers are looking to purchase fertilizer ahead of spring in the Northern Hemisphere, and Canadian producers recently idled 1 million metric tons of output.

Miners in Belarus and Russia are running at full capacity and “could not produce more” if they tried in the short term, said Jonas Oxgaard, analyst with Sanford C. Bernstein & Co. Any outages could allow for higher prices for Canpotex, a joint venture which markets sales outside of North America for Nutrien Ltd. and Mosaic Co.

The removal of one of Belaruskali’s mines would take out about 2.5 million tons, or roughly 4 percent of global production, Goldman Sachs analysts Adam Samuelson and Brooke Roach said in a March 9 report.

“If there’s an upset, you’re going to have a shortage somewhere,” said Sanford’s Oxgaard, adding that there hasn’t been a major outage from a potash mine in several years, and “we are basically due,” he said.

A supply squeeze could help potash prices to recover after years of ample inventories. It could also mean a rebound for fertilizer equities. U.S. producer Mosaic has climbed about 3 percent in 2018, but the shares are down more than 50 percent since the end of 2012 as a multi-year rout for crops cut farmer spending.

While outages are infrequent, they have caused supply shocks in the past. In 2006, Uralkali lost a mine after a sinkhole wider than 100 meters opened above the site. In 2014, a flood at Uralkali boosted prices at a time when companies were curbingoutput following the breakup of the company’s sales alliance with Belarus.

In Belarus last week, the roof of the potash mine tunnel crashed down, with methane being discharged, Belaruskali Chief Executive Officer Ivan Golovaty said in a statement on the company’s website. While “such phenomena do occur in our Starobin potash deposit,” it was the first time an incident of such scale happened without any prior warning signs, he said.

Sudden outbursts of salt and gas in Belaruskali mines are caused by geological structures which have gas in their nucleus, contained under enormous pressure. Workers had no chance to react and escape and two people were caught by the falling rock and died “in a fraction of a second,” according to the statement.

“There is absolutely no threat of us stopping production at this mine,” Makhlai said by phone from Soligorsk. “The mine has several directions, and the incident affected only one mine tunnel in one of the several mine sectors. Idling it is out of question, everything is working.”

Even so, the accident shows the risk associated with potash supply and could drive prices higher in the short term, Jacob Bout, an analyst at Canadian Imperial Bank of Commerce, said in a March 9 report. Canadian exports remain strong amid demand from Asia, and as prices tick higher, there’s a possibility the Chinese supply contract may top $250 a ton, up at least 9 percent from a year earlier, he said.

— With assistance by Megan Durisin