A DECADE OF SOLID JOB GROWTH AND STRONG GROWTH IN DECEMBER

December’s job numbers show Saskatchewan had the second highest percentage employment growth rate among the provinces between 2007 and 2017 and added 5,000 jobs in December, starting the year from a position of strength.

There have been 62,700 jobs created over the last decade in Saskatchewan, a 12.4 per cent increase, well above the national rate of 9.8 per cent. 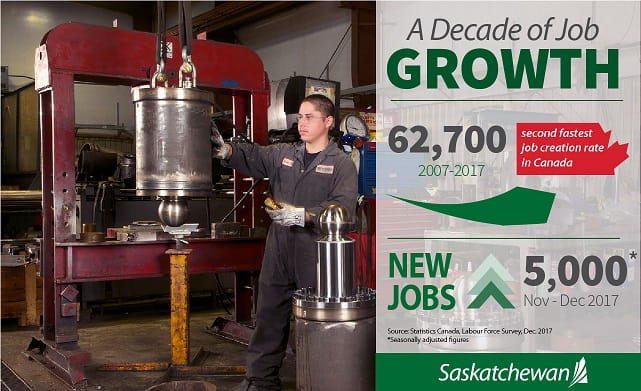 “There are more than 60,000 more jobs today in Saskatchewan than there were 10 years ago,” Premier Brad Wall said.  “This has been a period of exceptional growth for our province, driven by businesses large and small.  Thanks to their efforts, there are more opportunities for Saskatchewan people to build a career and contribute to our community.  With our population continuing to grow, we are beginning a second decade of growth.  For Saskatchewan, the best is yet to come.”

Posted on January 5, 2018, in economic impact, political. Bookmark the permalink. Leave a comment.